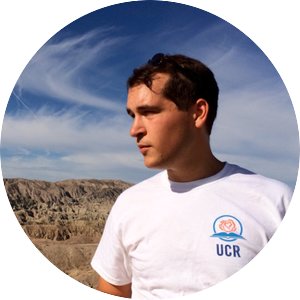 I started my research career as a chemist troubleshooting chemical synthesis reactions, but soon realized the chemistry of the environment was more interesting to me (and allowed me to go outside sometimes!). In 2015, I started a Ph.D. program at the University of California Riverside (UCR) where I used the chemical composition of soils and atmospheric particles to determine sources of particulate pollution near the Salton Sea, CA and chamber experiments to investigate the chemistry controlling climate-relevant properties of organic aerosols. While at UCR, I was fortunate to collaborate with others investigating the toxicity of selenium aerosols, the influence of ammonia on brown carbon formation, and trace metal tracers of sediment pollution. I graduated from UCR in 2019, and worked as an analytical chemist at the University of Wisconsin-Superior, Lake Superior Research Institute, before starting with the Biometeorology group in 2020.

In the Biometeorology group I’m investigating methods of reducing N2O emissions from corn cultivation using a mesocosm facility. N2O emission is strongly controlled by soil conditions but has significant atmospheric effects, as N2O is both a potent greenhouse gas and catalyst of stratospheric ozone destruction.  The Biometeorology group’s mesocosm facility enables fast and high throughput investigation of N2O emissions and mitigation.

I’m also using atmospheric modeling, tall tower measurements, and satellite data to constrain the magnitude and controlling processes of ammonia emissions in the Midwest. Ammonia is a vitally important atmospheric component, as it contributes to air pollution and is a major method through which nitrogen is transported between ecosystems. Excess ammonia emissions, and following deposition, contribute to eutrophication and losses of ecological diversity. This work is being performed using the Weather Research Forecasting Model with Chemistry (WRF-CHEM) and the Data Assimilation Research Testbed (DART).