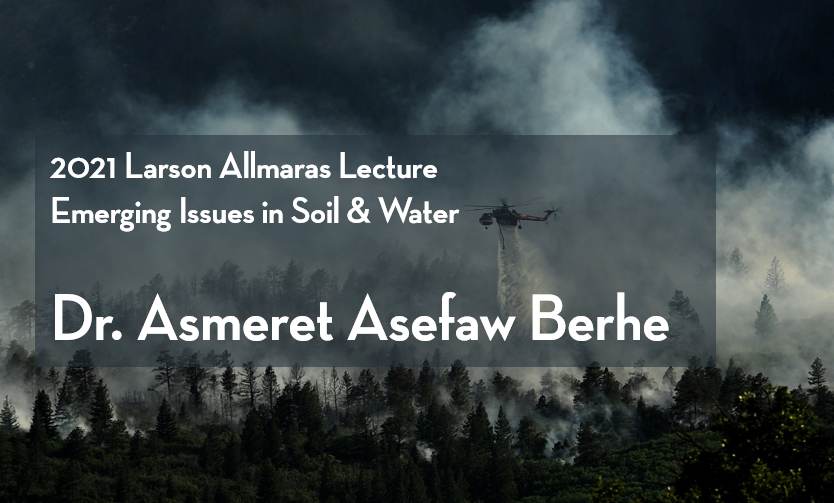 Photo of a smoky forest and a helicopter by the USDA.

Speaker: This year our speaker is Dr. Asmeret Asefaw Berhe, a professor of soil biogeochemistry, and Falasco Chair in Earth Sciences at the Department of Life and Environmental Sciences, University of California, Merced. Professor Berhe's research is broadly focused on soil science and global change science. Her 2019 TED Talk has been viewed nearly 2 million times. She co-authored the paper "10 simple rules for building an antiracist lab."

We have invited her to give two talks: the first on the effects of fire on organic carbon in soils, and the second on diversity and equity in soil and climate science. There will be times for discussion after each talk.

Abstract: Fire, erosion, and soil carbon (C) dynamics overlap in space and time. Increased rates of erosion typically follow wildfires, and fire-altered or pyrogenic C (PyC, also referred to as black carbon) is redistributed vertically within soil profiles and laterally to lower landform positions along hillslopes, changing its C sequestration trajectory. However, we currently lack sufficient understanding on how and why the interaction of fire and erosional distribution of soil materials control persistence of bulk soil organic matter (SOM) and PyC in dynamic landscapes. In this talk, I will present results from wildfires that occurred in the Sierra Nevada Mountains (USA) to demonstrate how the composition (based on stable isotope composition of 13C and 15N, and NMR analysis of OM composition) and magnitude of pyrogenic carbon redistributed by soil erosion varies considerably depending on fire severity and geomorphology of the landscape. Our findings also show that PyC is preferentially transported by erosion post-fire, and that erosion is a major mechanism that determines its fate post-fire.

Abstract: The field of geoscience remains one of the least diverse fields in Science, Technology, Engineering, Mathematics and Medicine (STEMM). Because demographics of groups and institutions provide a window into the culture, climate, equity, and inclusion of minoritized scholars, I will discuss the data on lack of diversity and how lack of diversity continues to affect our science and the scientific community, and its implications for the welfare of the global population. I will discuss the how we can improve the culture and climate in academic institutions by building antiracist labs that promote beliefs, actions, or policies that people of different races and ethnicities are equal.

Part of the William E. Larson and Raymond R. Allmaras Emerging Issues in Soil and Water Lecture Series, made possible by the generous support of the Larson and Allmaras family, friends, and donors. If you would like to support this lecture series, you may give here.