Stormwater is considered as an alternative water source for both potable and non-potable uses. However, stormwater has not been widely used as an alternative water source, most likely due to a lack of knowledge about the presence and risks associated with pathogens and antibiotic resistance genes present in raw and treated stormwater and how these populations change with environmental conditions. In this study, five different stormwater reuse systems in the Twin Cities metro area were sampled for every three weeks from June to October 2019 to build a comprehensive data set for analysis of temporal dynamics of pathogens and antibiotic resistance genes (ARG) in raw and treated stormwater samples. Microfluidic qPCR, a high-throughput quantification tool provided microbial data for 12 bacterial pathogens, 11 viral pathogens and 48 ARGs along with physiochemical testing such as turbidity, free and total chlorine, and water temperature to evaluate environmental conditions. The calculated pathogen and ARG removal efficiencies for each stormwater reclamation processes compare how well these contaminants can are removed by different stormwater reclamation systems. Correlations between pathogen and ARG levels and environmental parameters such as temperature and precipitation assess the impact of precipitation and other environmental variables on pathogen and ARG concentrations in stormwater. Pathogens were detected sporadically throughout the sampling, whereas ARGs were detected more frequently. Human Adenovirus, not a commonly detected or monitored pathogen, was most prevalent among the pathogens tested. There were no single environmental or chemical factors that were strongly correlated with the number of genes detected per sample. Multivariate analysis may be necessary to clarify the relationship between environmental factors and the occurrences of pathogens/ARGs. 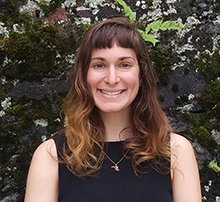 Tamara Walsky is a MS candidate in the Water Resources Program, in Dr. Satoshi Ishii’s lab. As an environmental microbiologist, she aspires to understand the roles and functions of microorganisms and how they intersect and impact human and environmental health and quality. She earned her BS in Biology and in Environmental Science and Technology from the University of Maryland in 2015. Originally from Baltimore, Maryland, she did not know anything about Minnesota before she moved here, but remains very pleased with this decision.

Part of our Spring 2021 Seminar series.
Recordings are shared on our YouTube channel.