Laying the groundwork for student success

Before the UMN Soil Judging Team could win the Region V contest, Dr. Nic Jelinski had to lay the groundwork for a successful learning experience. 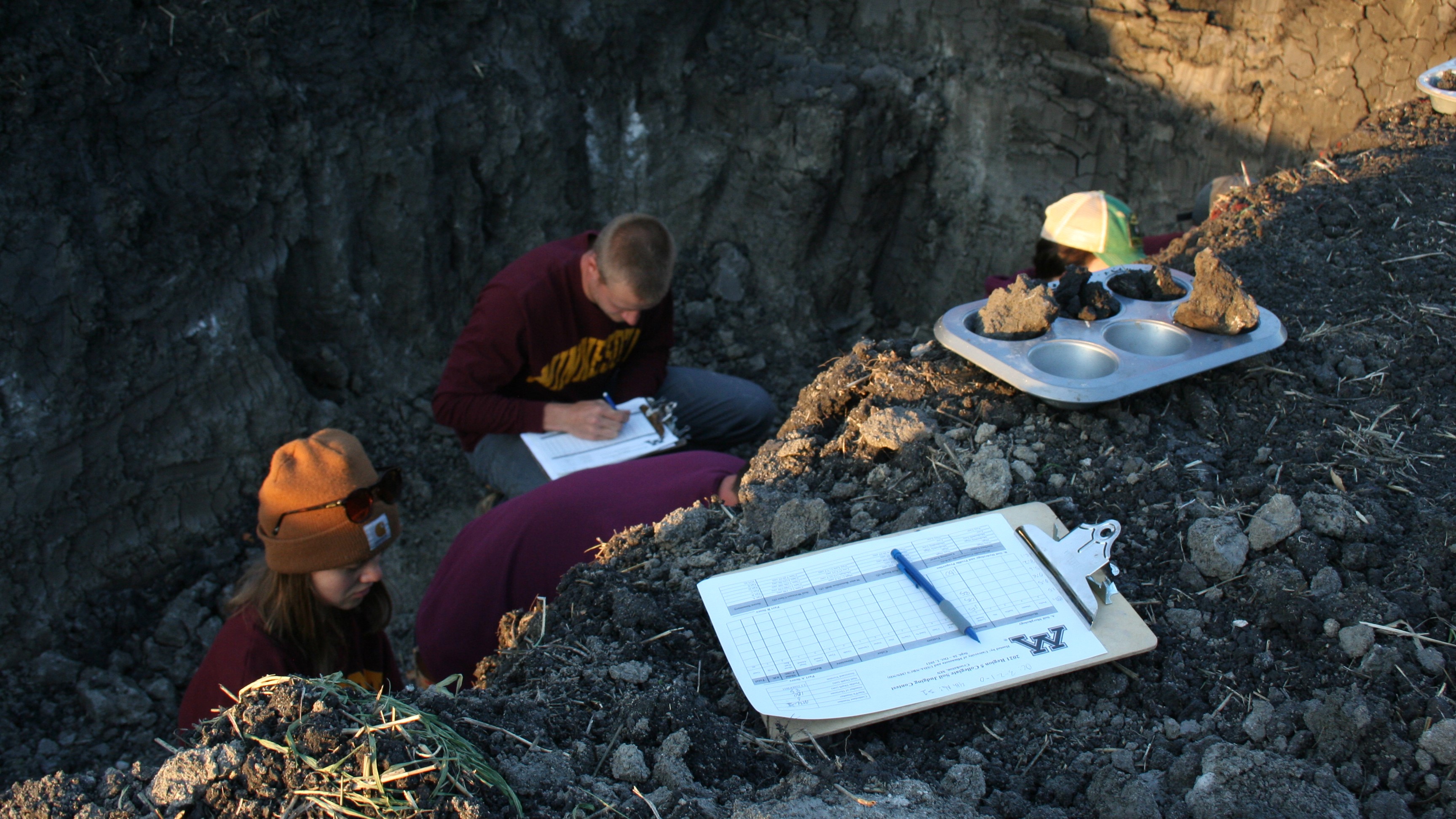 This September, the University of Minnesota hosted the Region V Soil Judging Contest in Crookston, Minnesota. The event was months in the making and spanned more than 30 miles of the Red River Valley. The result was a substantive, hands-on learning experience for more than 60 students and 15 coaches and faculty mentors from eight universities across the Midwest and the Great Plains. Dr. Nic Jelinski, pedologist and faculty mentor of the UMN Soil Judging Team, organized the weeklong contest.

This was Jelinski’s second time hosting the Region V Soil Judging Contest; the hosting responsibility rotates between participating teams from Minnesota, the Dakotas, Nebraska, Kansas, Missouri, and Iowa. The contest can take place in any part of the host state.

The first question Jelinski asked himself is where would be an interesting place in Minnesota to go, both for traveling teams, and himself. He landed on Crookston. “The soils and landscapes in the northwest part of our state are totally unique and very exciting,” said Jelinski. And Crookston is home to UMN Crookston, which served as a home base for the weeklong event.

Once the location was decided, Jelinski reached out to USDA-NRCS soil survey staff, who understood the soils of the region in fine detail. He was looking for the most diverse soils he could find. “There were fine clay soils that formed in the bottom of a glacial lake; there were soils that formed on the beach ridges of that glacial lake; and there were soils that formed outside of the lake but were influenced by the presence of the lake.” By analyzing several pits that each told part of a story, students would be able to connect the dots and get a sense for the whole soil system. “They see the diversity, but they also start putting them together at a landscape scale.”

With learning outcomes in mind, Jelinski began reaching out to people who might allow him to dig soil pits on their property. “We know the soils we’re looking for. Now we have to find people who will let us do this.”

“I worked with folks at American Crystal Sugar,” said Jelinski, the agricultural cooperative of sugar beet farmers, headquartered in nearby Moorhead. “They have agronomists that work with growers.” The agronomists were able to talk to growers in their network, explain soil judging and the contest, and ask if they would be willing to have a soil pit dug on their land.

Jelinski also spent time looking at county plat maps to identify interesting soil sites. He would either cold call the property owners or stop by their field site. “A lot of people were interested in having students come and look at their soils. It was novel and interesting for them.” One landowner saw this as an opportunity to educate soil students, who he saw as the future leaders of soil and water conservation.

By growing his network of soil scientists, agronomists, landowners, and growers, Jelinski secured seven field sites in and around Crookston, and a total of 27 soil pits for students to judge.

The value of a soil pit 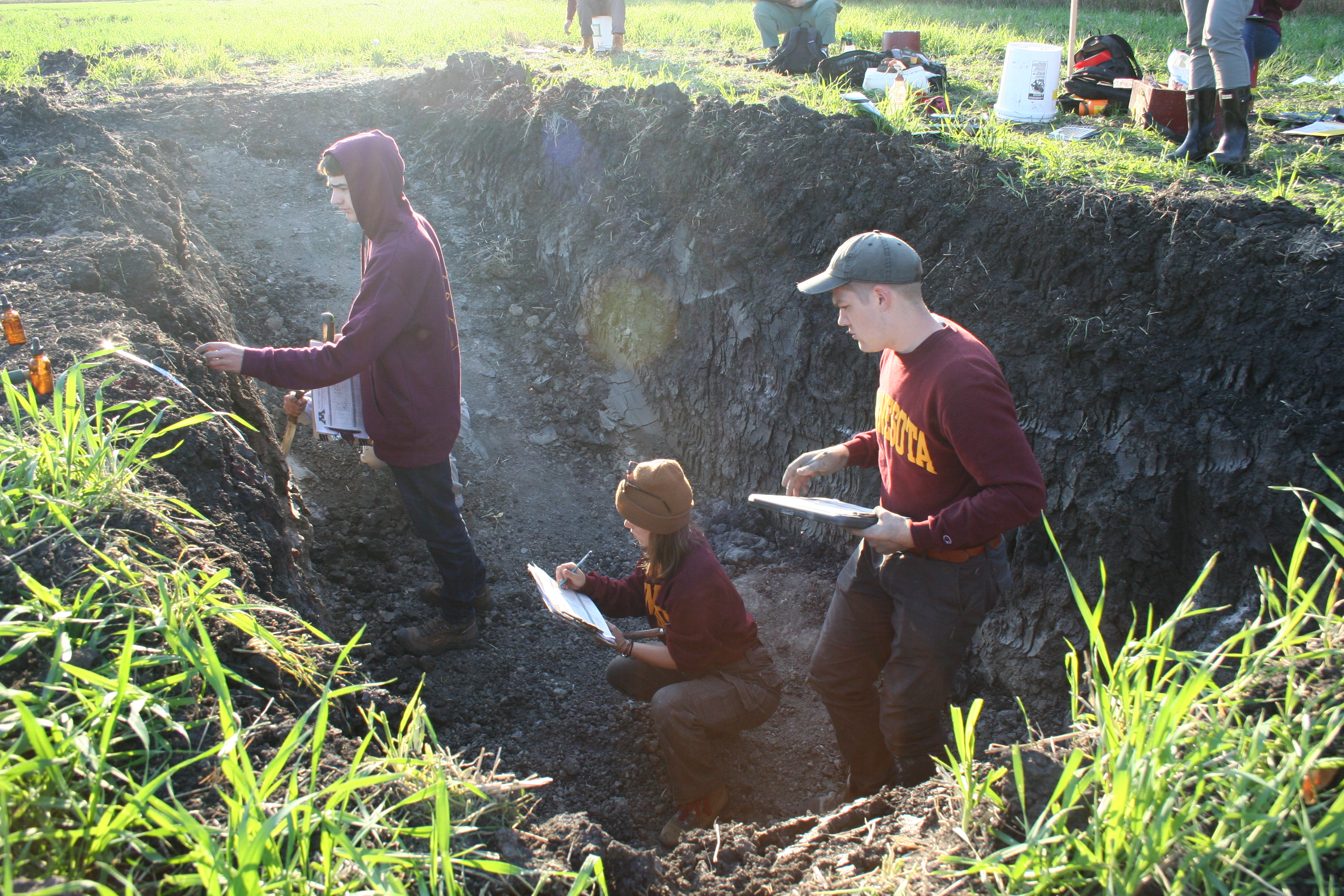 There are a few different ways to study soil. The easiest is to use an auger, which can be turned by hand into the earth; samples a few inches wide are pulled up and turned into buckets or reconstructed into a core sample. (When travel was prohibited in fall of 2020, the Region V Soil Judging Contest involved judging soil core samples collected by the host team and sent to participating schools, instead of teams traveling between states and field sites.)

The value of a soil pit, as opposed to a core sampled by an auger, is a much larger exposure of the soil face on three sides. Instead of sampling just a few inches, soil pits are up to four feet deep and five to six feet wide. The structures and horizons are preserved in a pit, unlike in auger samples, where they can be disturbed by removal.

“This is why I think soil judging is so valuable: There is no other context that we would have that many soil pits open in a small area. It’s just such an amazing learning opportunity for the students, for the faculty, and for me as the organizer.”

Students describe the exposure, separating the soil into horizons, then classify each layer in terms of the color, the structure, the texture, the presence of lime, and other properties they can identify. They must then make interpretations of the soil’s behavior, estimating the runoff and water holding capacity, classify the soil, and identify the parent material and landscape properties.

This is why I think soil judging is so valuable: There is no other context that we would have that many soil pits open in a small area. It’s just such an amazing learning opportunity for the students, for the faculty, and for me as the organizer.

The first three days of the five-day contest were spent learning the local landscape, and developing soil judging skills in test pits. Students practiced both their individual skills and worked as a team, and collaborated with other students from other universities. The UMN coaches Hava Blair and Megan Andersen, graduate students in the Land and Atmospheric Science Program, guided the team through the process of judging each pit.

The hands-on learning was supplemented by knowledge from local soil scientists and professionals, including Dr. Lindsay Pease, SWAC faculty member based at UMN Crookston. Most soil judging students have taken Basic Soil Science and Field Study of Soils. The time spent in the pits preparing for the contest made the classroom learning and studying tangible. “Students gain confidence in their own skills and knowledge. They discover how they can apply some of the things they learned in the classroom--physical, chemical, and biological processes--and make interpretations based on that.”

On the fourth day, things got competitive. Students are asked to judge unseen pits, in locations that Jelinski has kept secret from everyone except his small team of co-organizers.

“By the end of the week, students are describing the soils independently, on a landscape that is brand new to them. They're making all these interpretations. They don't realize that transformation; some of them start the week never having been in a soil pit before… They’re using their senses, their own eyes and hands, to make these choices in the field,” said Jelinski.

The results are in 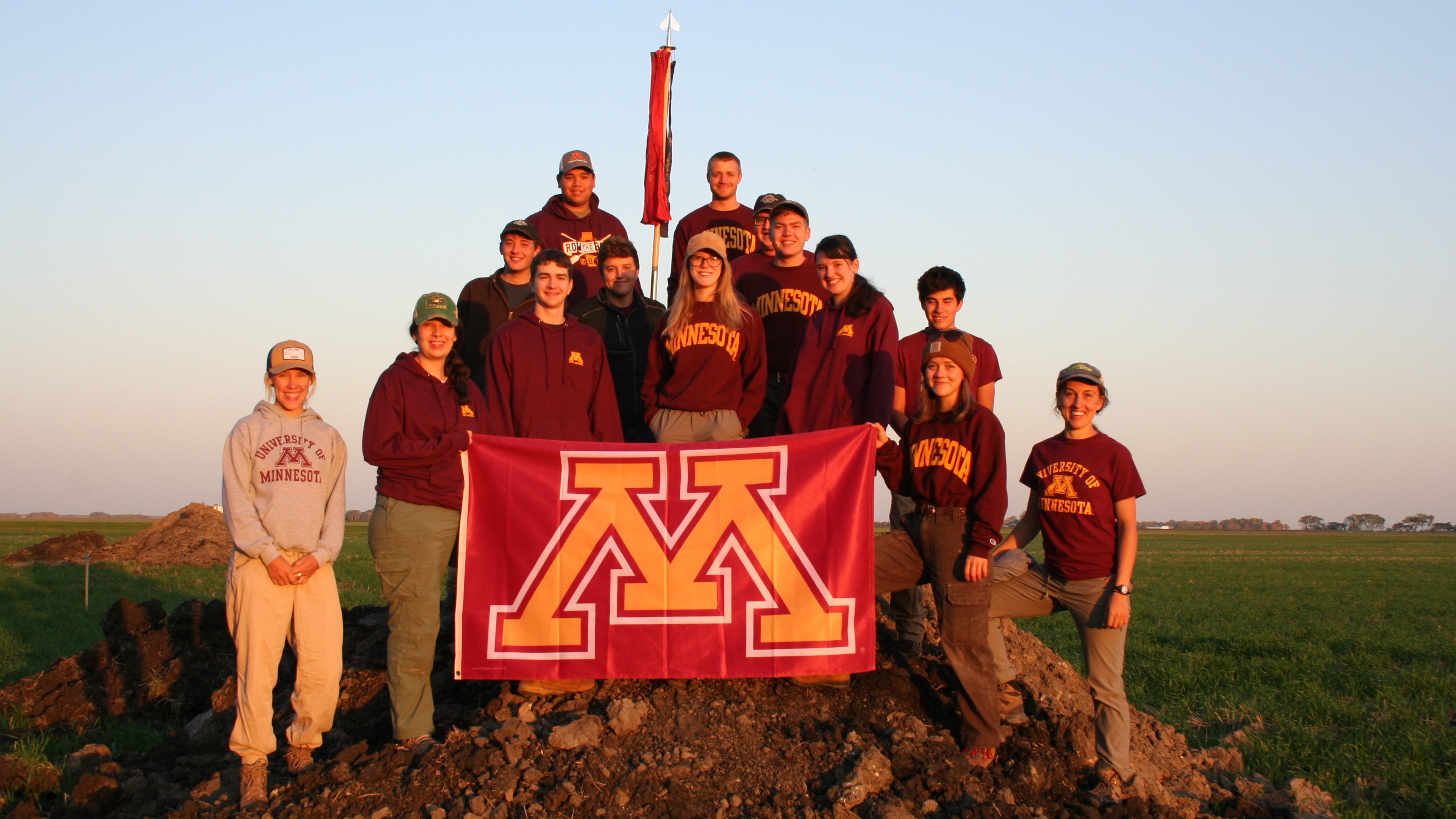 Points are awarded to interpretations that most closely match the official interpretations made by the judges, in this case Jelinski and USDA-NRCS soil survey professionals. Scores are tabulated to determine individual results, team judging scores, and an overall winning team.

The UMN team would soon learn that they placed first in the group judging event, and two students—Cole Montgomery and Ben Newcomb—received individual judging awards. Taken together, this would lead to an outcome of first place overall in the competition, and qualify the team to compete in the national contest.

But before their success was known, Coach Andersen recalled a moment of reflection: “After the contest and before any of us knew the official results, I asked the team what their favorite part of the week had been. The majority left Crookston with a greater appreciation for soils and a desire to give others the same experience they had been given. All of them agreed that it was so nice to connect with new people again, both on their team and competing teams, and that they were so proud of how they had worked together and built a team dynamic over the course of a few days. Reflections like these make a coach prouder than any plaque ever could!”

Looking back on months of preparation and a busy week hosting the Region V contest, Jelinski is able to appreciate the community he has built: “Enabling these experiences takes a village. Without the assistance of USDA-NRCS staff, landowners, private companies, state and federal agencies, and faculty members at the University of Minnesota-Crookston, the contest never would have happened. My goal was to create an environment where students could learn to be bridge builders, to connect with each other through a shared love of the land and the soil resource that crosses cultural, socioeconomic, and political boundaries."

You can support the UMN Soil Judging Team during their Give to the Max Day fundraising campaign. Thank you!

This story was written by Aimee L. Gillespie, communications specialist in the Department of Soil, Water, and Climate.